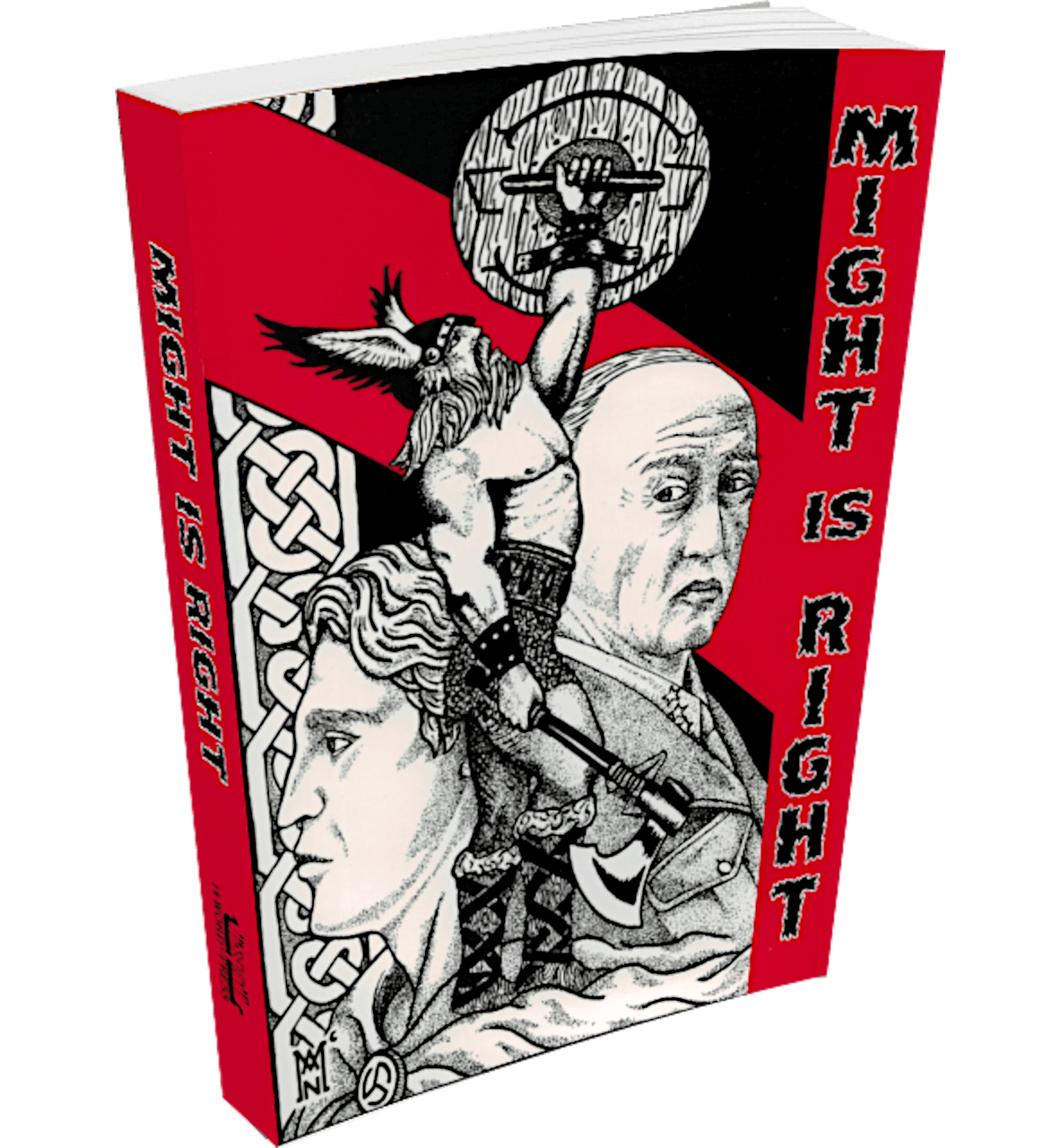 The Survival of the Fittest

MTP is the exclusive distributor of original 14 Word Press publications

A title like Might is Right almost precludes the necessity of an introduction, since all history, natural law and common sense, declare its truth.

The “author” of this epic manifesto remains an enigmatic issue. As most of history is merely “the propaganda of the victor,” we shall never be certain of many details. Due to the nature of Might is Right and the brutal truth of its dynamic pronunciamentos, it has never before been published with the critical eye of a major publishing house. It appears that the raw text (of the original with additions) has been meticulously preserved in a near unadulterated form.

14 Word Press is honored to present here, for Wotansvolk worldwide, this exclusive Millennial Edition. For the first time since its original release a century ago, Might is Right has now been published with particular and much-deserved scrutiny to detail, leaving the 1910 text nearly unaltered.

Having had the task and privilege of editing this powerful piece, the arcane evidence of authorship in the work itself became quite apparent. Ragnar Redbeard indeed ranks with Nietzsche—if he himself was not the initial author—as an intelligent and erudite thinker and writer.

Many believe that Jack London was Ragnar Redbeard. Nevertheless, the literary styles reveal unequivocally that Might is Right had at least two distinct authors. The original “Redbeard,” wrote in a clean, technical style, consistent and methodical. In fact, it is very possibly the product of a skilled translator retained many of the upper-case nouns and punctuation typical of the German language; the entire text is laced with numerous foreign phrases and translations.

However, interspersed throughout this treatise are sentences, often whole paragraphs, of passionate commentary expounding upon and contrasted to the near clinical approach of Ragnar Redbeard. It seems convincingly clear that these complementary addenda were authored by Jack London, a brilliant, creative talent, naturalist, lucid visionary and exceptional philosopher with an incandescent imagination.

Solely on a grammatical basis, this is an airtight conclusion. London, a purely artistic genius, had no regard for standard punctuation or sentence structure. His personal writing style was as idiosyncratic as his trademark passion was pronounced. The poorly punctuated, verbose, adjectival out-pourings of abundant vocabulary and run-on sentences are unmistakably London. Aside from Londonesque writing style and philosophy, the fact that some claim to have seen portions of the Might is Right manuscript in London’s own hand lends credence to this theory.

A careful reader will instinctively sense the temperamental roller-coaster created by the blend of these markedly distinct writers, as the cultural references swing back-and-forth between European and American orthography, colloquialisms, syntax and historical perspectives. And just as Jack London was infectiously enticed, it is assured that the reader will have his own personal, emotional and eloquent reaction to the illuminisms apotheosized herein.

Regardless of the true identity of the authors, truth is indisputable; truth is its own author.

Some have criticized this iconoclastic masterpiece for “advocating anarchy.” The fact that we might perceive the ruthless cruelty of Nature as chaos does not change our reality: Man and all his laws are subject to the mercilessly indomitable Laws of Nature. Our racial survival depends on Aryan man rediscovering his Nature-ordained manhood. He must choose between cowardice and courage, between comfort and freedom, between extinction and a future for White children. There is no compromise.

14 WORDS: “We must secure the existence of our people and a future for White children.”