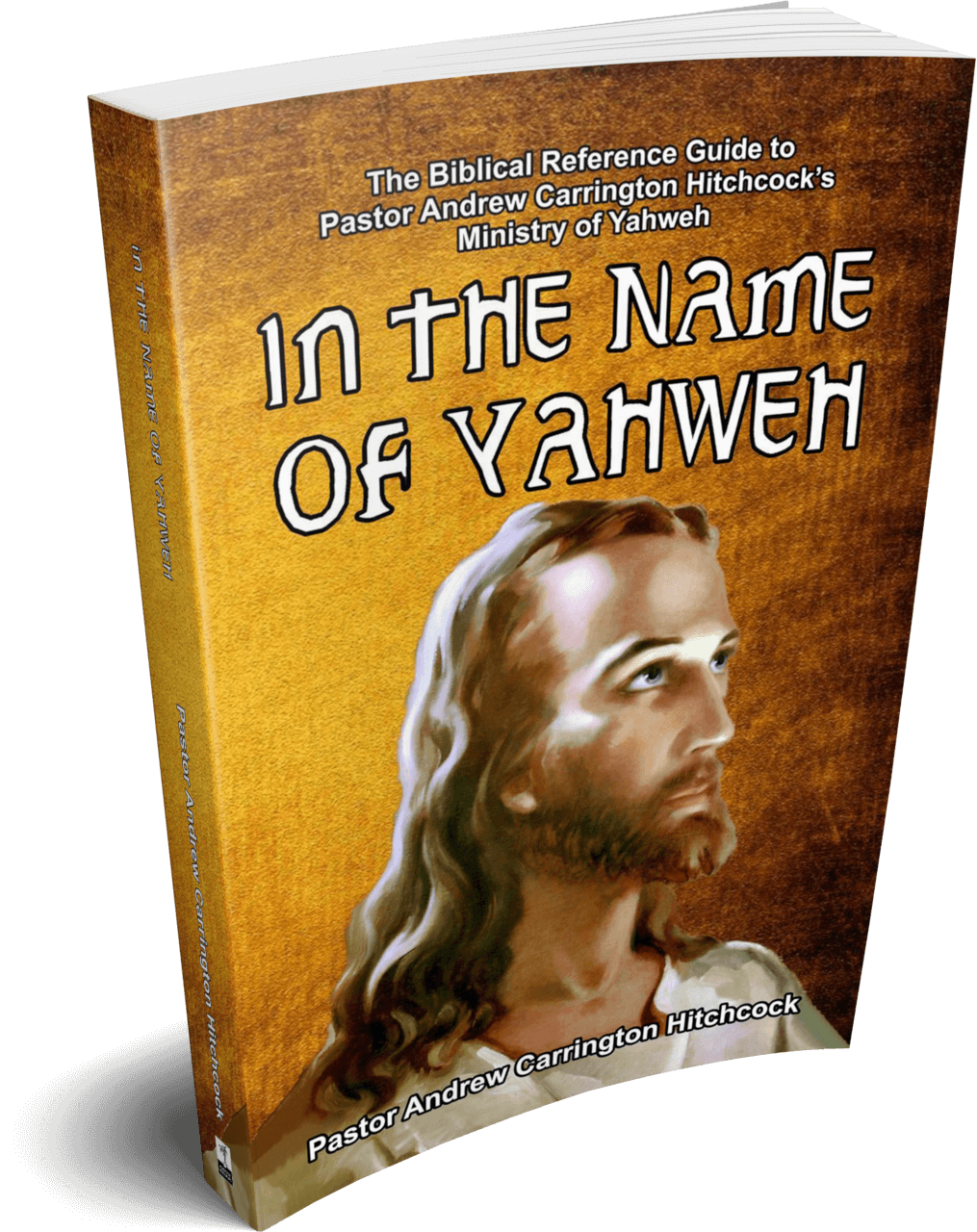 In the Name of Yahweh

Andrew Carrington Hitchcock introduces
In the Name of Yahweh

Add The Synagogue of Satan: Updated, Expanded, and Uncensored and orders shipped to non-U.S. addresses pay no extra shipping.

FOREWORD TO THE 2018 EDITION

I became aware of Andrew Carrington Hitchcock as a result of his publication of the book, Synagogue of Satan. One day I heard Andy being interviewed by Daryl Bradford Smith of iamthewitness.com (now defunct), an expatriate American living in France. Freedom of speech is not permitted in France, so Daryl’s website was taken down. I can’t remember if Andy contacted me or I contacted him, but our broadcast relationship began in 2006, with a show on talkshoe.com, which was, at that time, the only Internet venue that would not censor Christian Identity content. Andy then traveled to America to join with us in 2008 for our Feast of Tabernacles celebration in Atlanta, sponsored by Pastor Jonathan Williams of the United Church of Yahweh. Pastor Williams was ordained by Pastor Butler of Aryan Nations fame.

Although Synagogue of Satan is not an Identity publication, it is a record of the criminality and supremacism of the house of Rothschild and their Jewish and Masonic cohorts. As such, Synagogue of Satan is an excellent precursor to the Identity message, so much so that Synagogue of Satan can be considered to be the first Identity bestseller. One of the main features of Christian Identity is knowing who the Jews are. They are not Israel. They are the Edomites, Canaanites and Khazars. Knowing this about the Jewish people makes it easy to ask the question: “Well, if the Jews aren’t Israel, who is?” Anyone who asks this question is invariably led to the teachings of Christian Identity, as we teach that the Israelites of the Assyrian/Parthian/Caucasian migrations are in fact the only and true Israelites from the Middle East. The Celtic branch of Caucasian Israel migrated from Egypt during the Egyptian Captivity of Israel. Led by the tribe of Zarah Judah, these Israelites founded Troy, Rome, Spain, Ireland and Britain. Indeed, the word “British” means “Covenant People” in Hebrew. Anyone who doubts these propositions can find out all about it by going to anglo-saxonisrael.com to watch the Migration Chronicles slideshow, which details our migrational patterns and proves that the Caucasians are the Covenant People, Israel.

After dozens of shows together, beginning on talkshoe.com, Andy and I began doing “Bloodlines” on eurofolkradio.com, the flagship show there since 2014. In 2011, Andy also published In the Name of Yahweh, which established his bona fides as a teacher of Identity theology. I am sure that Andy, for most of his life, never intended to become a Bible researcher, but the Identity message is so compelling that any Israelite who starts on that road eventually becomes a student of the Bible and the Covenant Message.

This message, that we Caucasians are the Israel of Yahweh, is so divisive that even other Christians hate us, because they love the Jews more than they love their own race. So, Andy has chosen this yoke to live under because he loves the truth and he loves his people: The White Race. It is to awaken our brothers and sisters to this truth that we Identians persist against all odds, come what may.

Andy’s dedication to this cause, plus the outstanding work he has done as a broadcaster and as a teacher of the Identity truth, has earned him the right to be called “Pastor” (i.e., shepherd, teacher) of Israel, and I ordained him in May of 2018 into the Priesthood of the Order of Melchizedek, which is the hereditary priesthood of the Adamic (Aryan) Race, coming down from Adam and to be carried on into eternity by Yahshua Messiah (Jesus Christ), who was a blond-haired, blue-eyed Aryan. I was ordained by James K. Warner, of the Christian Crusade Church of Louisiana. Pastor Warner was ordained by Dr. Wesley Swift, so the priesthood remains in solid, dual-seedline hands.

Congratulations, Pastor Andrew Carrington Hitchcock. We look forward to much more service from you towards Yahweh and to the Covenant People. Your voice and pen have done much to awaken many Aryans to the Truth of the Holy Scriptures.